Take a minute to recognize the achievements of our students for the 2017-2018 school year!

Congratulations to junior Vincent Bian! He got a gold medal in the USA Physics Olympiad (USAPhO) test, and was invited to be a member of US Physics Team. The team invites only around 20 high school students each year, and will hold a two week intensive training camp at the University of Maryland. At the end of that training camp, five team members will be chosen as the “Traveling Team” to represent the United States Physics Team at the 49th International Physics Olympiad in Portugal.

Congratulations to the Humanities teachers who have led students to surpass last year’s success in the state National History Day competition! We are sending twelve students to the national event next month; PHS is sending seven of the 18 entries from the state of Maryland. National History Day projects require students to research deeply and discerningly into a topic of their choice (this year’s theme was Conflict & Compromise), then create an argument-based academic presentation. 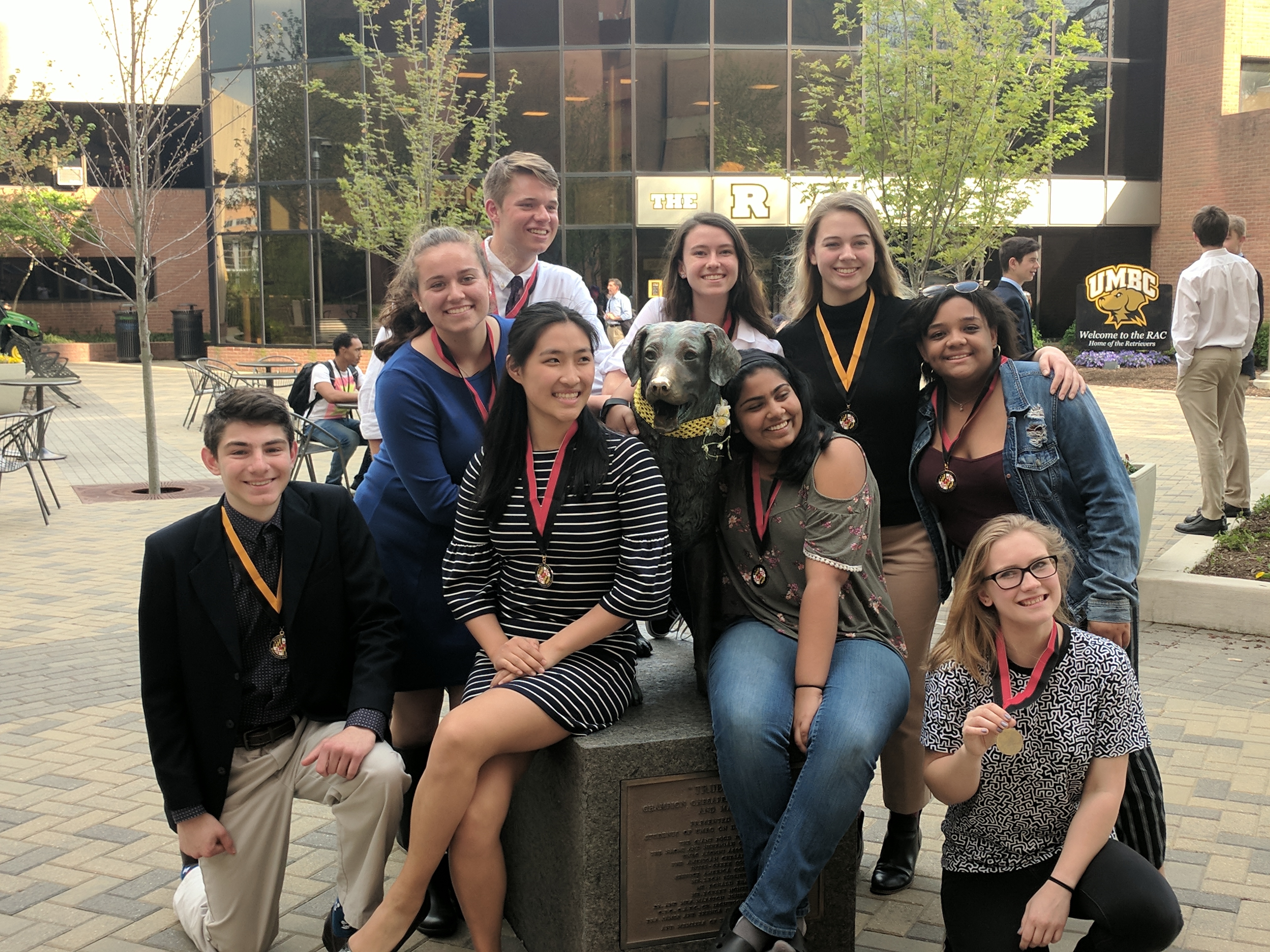 Congratulations to Racheal Ssentongo and James Jackson, both won Silver Awards at the Afro-Academic, Cultural, Technological, and Scientific Olympics. 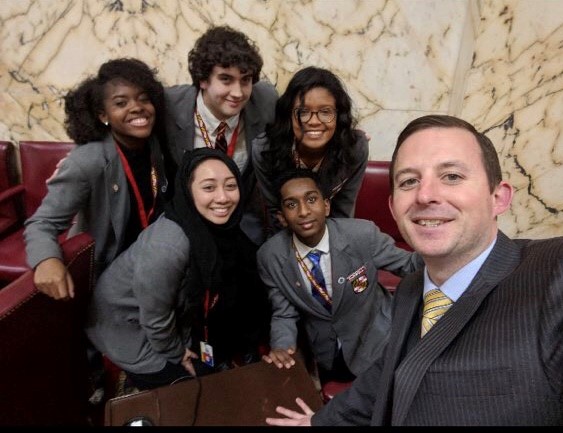 Kudos to SGA Vice President Darryl Marshall who served as a page for the 2018 Maryland General Assembly. Darryl was selected as one of only fourteen pages from Montgomery County, including both public and private school students. In addition, Darryl was selected by the MD GA staff as an all-star page to work the last day of session (Sine Die).

The 2018 Scholastic Art and Writing Contest awarded Katya Scott, a Humanities Sophomore, a National Silver Medal for her Personal Essay. After winning a Regional Gold Key, this national award places Katya in the top 1% of all entries in the nation. Congratulations to Katya Scott and her English teacher, Ms. Gibson. We are proud to have Katya represent Poolesville High School in this year’s Scholastic Writing Competition.

PHS Peep Thrills: The Winners of the 2018 Peeps Diorama Contest

The Colopeepum (#5)
By Gwendolyn Boe, Bryce Davis, and Taylor Ramirez

The empeeperor gazes down on two gladiators, one slain in the name of sport, his opponent’s spear sticking out of his sugary stomach. The other is triumphant, and gazing out at the peeple of the Roman empire. The different colors of Peeps represent the social strata of ancient Rome: Blue and yellow Peeps take in the action from the nosebleeds while upper class purple Peeps get a front-row seat to the carnage.
On the exterior, deconstructed and reconstituted Peeps represent the Colosseum’s Doric columns. An expert spray painting job gives these Peeps the feel of a true ancient ruin, and the giant empeeperor gives the whole affair a sense of grandeur. 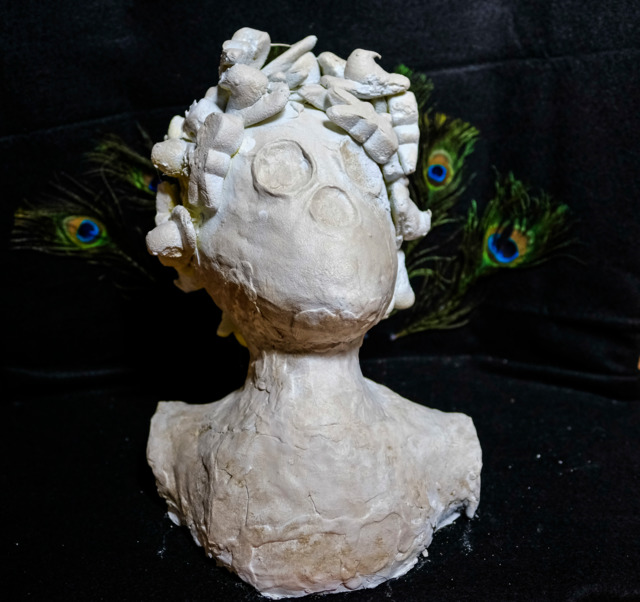 In place of snakes, Medusa’s head is covered in Peeps—and painted with several layers of stone-colored acrylics to achieve a “dramatic Baroque effect.” The team chose the Medusa, largely because they felt “Berpeepni” was the best Peep pun they could come up with for a classic work of art. Medusa’s head is a styrofoam base covered in clay, and the team replaced Medusa’s pained expression with the traditional three-dot face of a Peep. 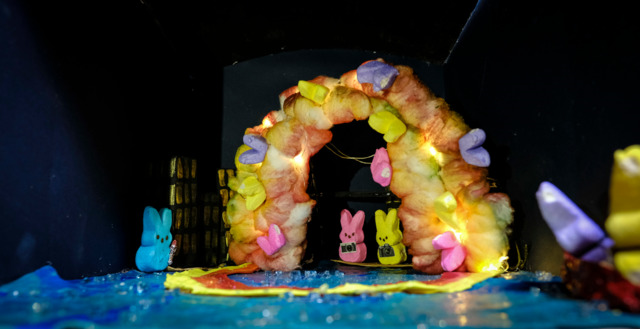 This diorama is based on artist Cai Guo-Qiang’s “Transient Rainbow,” which appeared in fireworks over the East River in New York City on a summer evening in 2002. “To achieve the dissolving yet radiant effects of Guo-Qiang’s fireworks, we intertwined small lights into the spray painted cotton ball rainbow,” the team writes. “Peep bunnies from all sides of the river watch in awe, some from boats and some on the shore. The blue Peep bunny to the far left holds the detonator that set off the fireworks from the shore.” 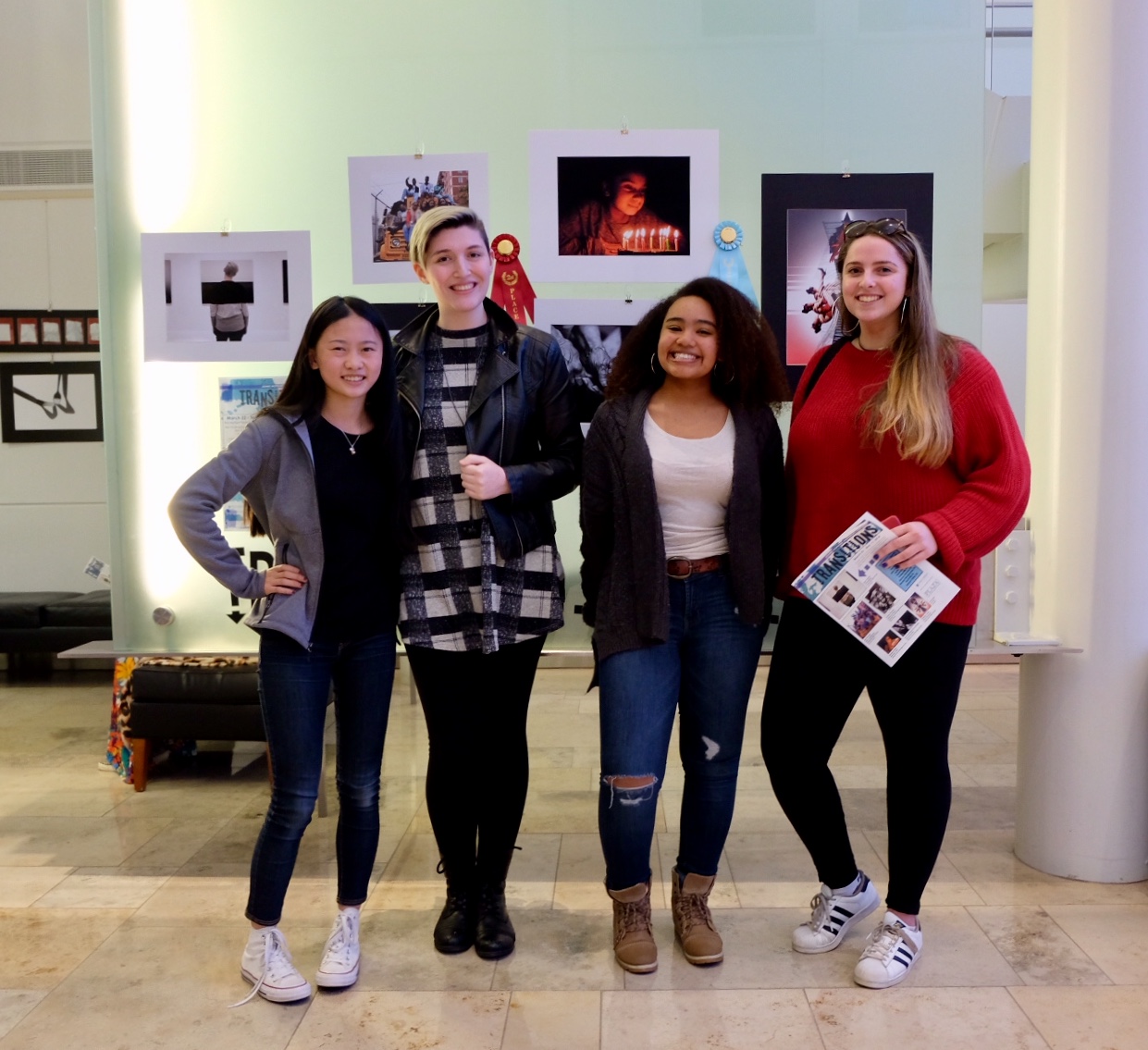 10 entries from PHS will advance to the state competition, which includes 20 students. That is 1/3 of the junior Humanities class and over 50% of the county winners. 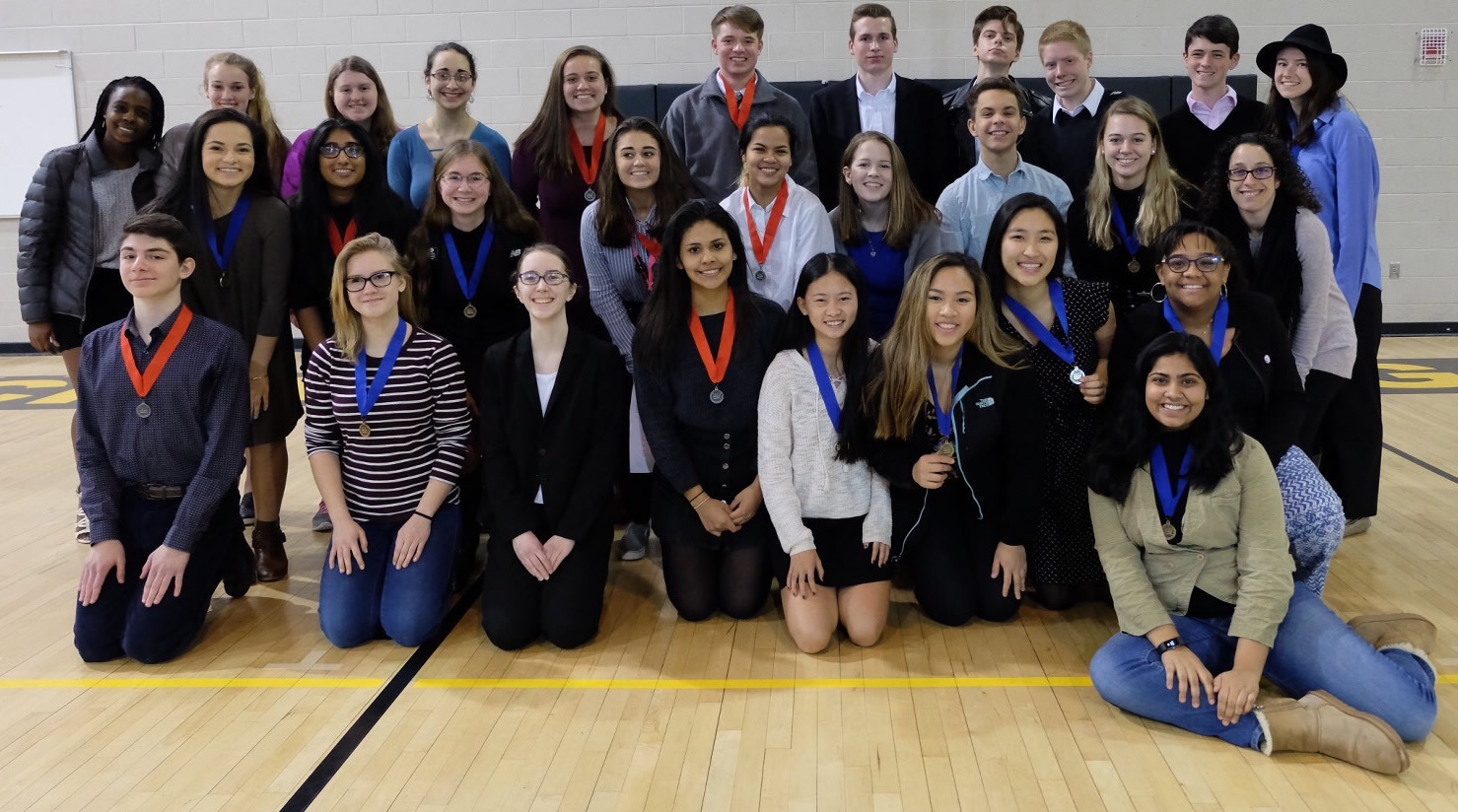 The competition was graciously hosted by Montgomery College. The content of the challenge (mystery) was developed by Poolesville students, Kevin Shen, Claude Zou and Ching-yuan Lin. They created an awesome competition for their peers throughout the county.

Angela Wang (11) has been selected to represent Germantown, Maryland as a National Youth Correspondent to the 2018 Washington Journalism and Media Conference at George Mason University.
Angela joins a select group of students from all over the country for an intensive study of journalism and media. Angela was chosen based on academic accomplishments and a demonstrated interest and excellence in journalism and media studies.
National Youth Correspondents participate in a week long, hands-on, experiential learning through decision-making simulations that challenge them to solve problems and explore the creative, practical, and ethical tensions inherent in journalism and media. The experiential portion of the program is complemented by speakers who are well-known leaders in the media community.
With distinguished faculty, guest speakers, and direct access to elite D.C. practitioners, the Washington Journalism and Media Conference offers aspiring journalists and student leaders an unparalleled experience, held at George Mason University’s state-of-the-art campus.

Congratulations to Cindy Chen (12), Esther In (12), Oksana Tkach (11), and Sreya Vangara (12).  for First Place in the National Girls Go CyberStart Challenge.  They will be attending the Women in CyberSecurity Conference (WiCySCo) in Chicago this year!

The entire SMCS program prepares students over four years for success in the senior-level poster presentations; Anu Sekhsaria and Soni Singh are the teachers who start their focused work with the seniors over the summer. The following three students have been invited to present their research at the prestigious and highly-selective Maryland Junior Science and Humanities Symposium (JSHS). The poster presentation is on March 14, 2018 at University of Maryland, College Park.

The entire ensemble ALSO won the award for the performance with the judges citing the intelligent reading of verse, the execution of a high concept, and the ability of the entire cast to commit, stay in character, and communicate the high stakes and emotion of each moment.

Silver Key Winner
Emillia Medina - Flash Fiction, “The Rabbit by the Window”
Brenn Hardaway - Personal Essay/Memoir, “And a Half”

Congratulations to our fifteen Scholastic Art Award Winners and their outstanding teachers and mentors, Shannon Heaton, Nora Schaefer, and Cam Petke! These students- from all four houses- brought home a total of twenty-five distinguished awards from the hundreds of thousands of entries. Please congratulate them as you see them!

Congratulations to the following Seniors on being named National Merit Scholarship Semifinalists!