Take a minute to recognize the achievements of our students for the 2014-2015 school year!

Thank you to everyone who voted for our students in the Innovate to Mitigate Competition. You can see the finalist videos at http://innovate2015.videohall.com/posters#/finalists/id=finalists. The students presented solutions to mitigate greenhouse gases in a short video presentation as well as an essay; they then answered questions from their peers and judges.

Senior Evan Whitehouse earned third place in the MD BioGENEius competition with a poster describing his research entitled “Investigating the Intrinsic Efficacy of Dopamine D1 Receptor Ligands for Functional Selectivity”. He is invited to present his research at the US National BioGENEius competition. Further details about the competition are available at the MdBio Foundation website: http://www.mdbiofoundation.org/?p=2806

Members of the PHS computer team participated in an international computer science contest hosted by the American Computer Science League. The Intermediate team of Sahil Mayenkar (10th), Justin Park (9th), Kevin Shen (9th), Alvin Ya (9th), and Jessica Yin (10th) performed well, placing 6th in their division and with Justin, Kevin, and Alvin winning individual awards. The Senior team of Seungkyoon Bong (10th), Karan Chawla (10th), Matthew Feng (10th), Suriya Kandaswamy (11th), and Devin Smedira (10th) had strong results, with all of the members receiving individual awards and with the team placing 2nd in the world and 1st in the country! Congratulations on a job well done!

Sophomore Anusha Dixit earned an Honorable Mention in the Energy category of the International Sustainable World Energy, Engineering, Environment Project Olympiad (ISWEEP) competition. Anusha presented a project entitled “The Effect of Relative Humidity on Solar Cell Efficiency”; her project was one of two projects selected at Science Montgomery Fair for this international competition.

The YRE USA Jury chose the following entries as those that best met the criteria for the competition and accomplished the goals of environmental journalism.

Congratulations to the following students for their awards in the National Spanish Examination.

PHS was quite well-represented among the winners at the MIT INSPIRE competition. Students stood by their posters at MIT, fielding questions from a judges, students, and other visitors.

ALSO, Sydney Yuen won the special Mozart award for the most original research in the competition.

Dan McKenna, Head of Humanities House and mentor was recognized as the runner-up for the Athena award, which was an award given to the top mentor, as indicated by nominations from students and evaluations of a school's submissions as a whole.

IDT’s annual student competition focuses on innovative methods of implementing Automated Software Testing. This year’s problem, addressing automated website testing, was released in December and team solutions were due on February 7. Submissions were reviewed by IDT judges and the top teams presented their solutions this week.

National History Day is an opportunity for students to learn about history while practicing their research and critical thinking skills. Students perform in-depth research on a historical topic, create a presentation in one of five formats and receive feedback from judges that helps them learn and improve. This year's theme was "Leadership and Legacy." The Montgomery County Historical Society sponsored the county-level competition.
Poolesville High School Humanities Students had an excellent showing in the county level competition. Of the 15 projects in the county that are moving on to the State contest, 7 are from Poolesville. The judges were extremely impressed by the professionalism, poise, and scholarship of our students, especially because this was our first year of participation.

For each category, up to two projects won a spot in the state competition.

Senior Group Exhibit:
Andrew Kocur and Patrick Walker on George Patton (the giant tank some of you may have seen) (juniors)

Senior Sreejan Kumar and SMCS junior Cherry Zou will represent Montgomery County at the Intel Science and Engineering Fair after earning first place in their categories, Biology and Computer Science and Mathematics, respectively. In addition, other PHS students won numerous awards at the 2015 Science Montgomery.

In addition to the Science Montgomery Awards, students earned awards from various community organizations. Some of these awards included invitations to future competitions, dinners, and monetary rewards.

We are thrilled to announce that 16 of our Humanities House Seniors were selected to represent our school at the MIT INSPIRE competition, a National Competition in the Humanities and Social Studies. Of the 100 or so finalists, Poolesville had 16. We also placed 4 alternates, who may yet get the chance to go to the final round.

The final round will involve a trip to Boston followed by research presentations, interviews, and evaluations by MIT professors and graduate students. Please congratulate our seniors and the teachers who mentored them.

Junior Kathryn Kavanagh has been invited to participate in Legacy International's 2015 American Youth Leadership Program - Cyprus (AYLP.) Representing the U.S. as a ‘cultural ambassador’, she will be embarking on an exciting journey as part of a team of eighteen American youth leaders chosen to participate in the AYLP program.

The American Youth Leadership Program is a leadership training and exchange program for U.S. high school students. It is supported by a grant from the US Department of State Bureau of Educational and Cultural Affairs and administered by Legacy International. The 26-day program focuses on the theme of environment and climate change. Participants will explore why sustainable management of resources is imperative, learn about careers in science, technology and environmental resource management, and work cooperatively with Cypriot peers to promote environmental stewardship.

Abhi Giri is featured in the MoCo February Art newsletter that goes out to all principals, BOE members, Reps, and art teachers. He talks about his dual interest in art and science.

Congratulations to current 10th grader Simon Arango for earning perfect score on his Advanced Placement Spanish Language Exam in the spring of 2014. 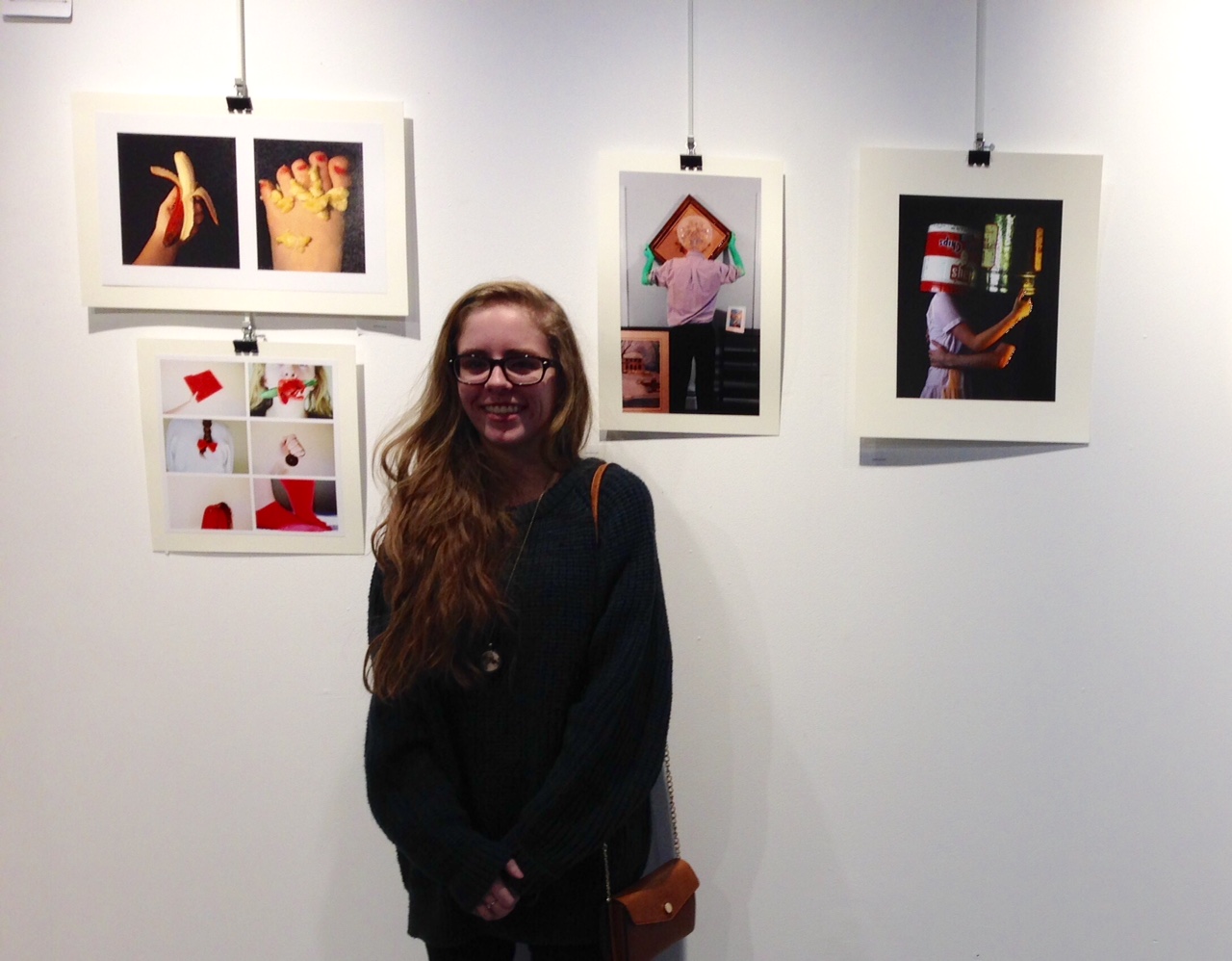 Erin Bowles won 2nd place out of hundreds of photographs on display at the Washington school of photography high school photo competition. Dani Thorner won an award for Honorable Mention.
Poolesville also had images on display by 15 other students in their main gallery and their photographs will remain on display until the end of March 2015.

PHS has had two groups chosen as Finalist in the SourceAmerica Design Challenge, formerly known as the AbilityOne Design Challenge. If you see Angela Zhou, Amber Liu, Lee Dodds, Annie Bao, Deepti Agnihotri or Suriya Kandaswamy please congratulate them on this amazing honor. They were two of the top five groups in the entire country. They will be competing against teams from Connecticut, Ohio and Kansas in February. Click HERE to see more information and student project videos.

The results for the 2015 Northeast regional Scholastic Art & Writing Awards are out and we have 3 Gold Key winners from PHS. These students are automatically eligible for the national competition.
Annika Land - Gold Key
Kat Eader - Gold Key
Dani Thorner – Gold Key – “Take a Seat” 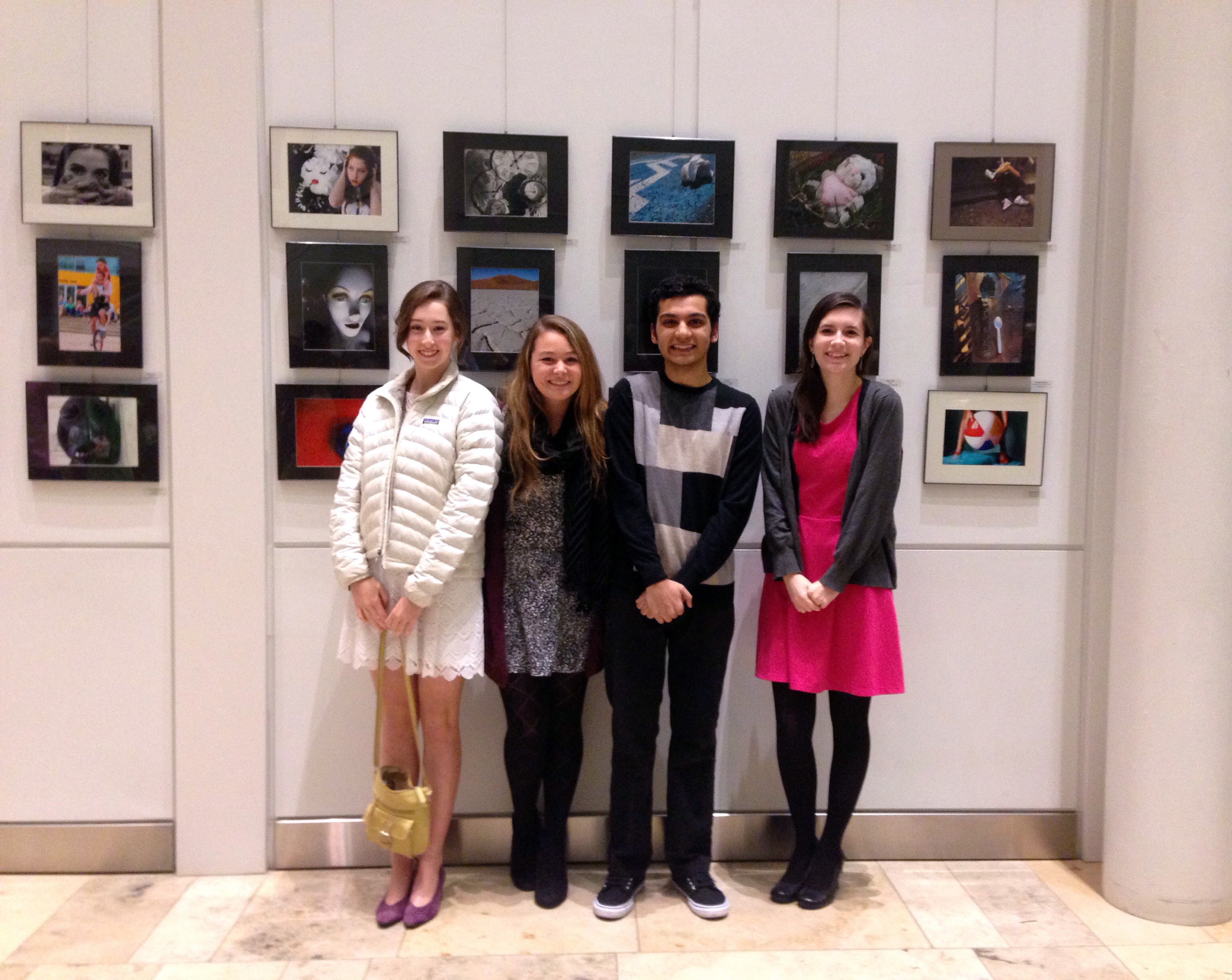 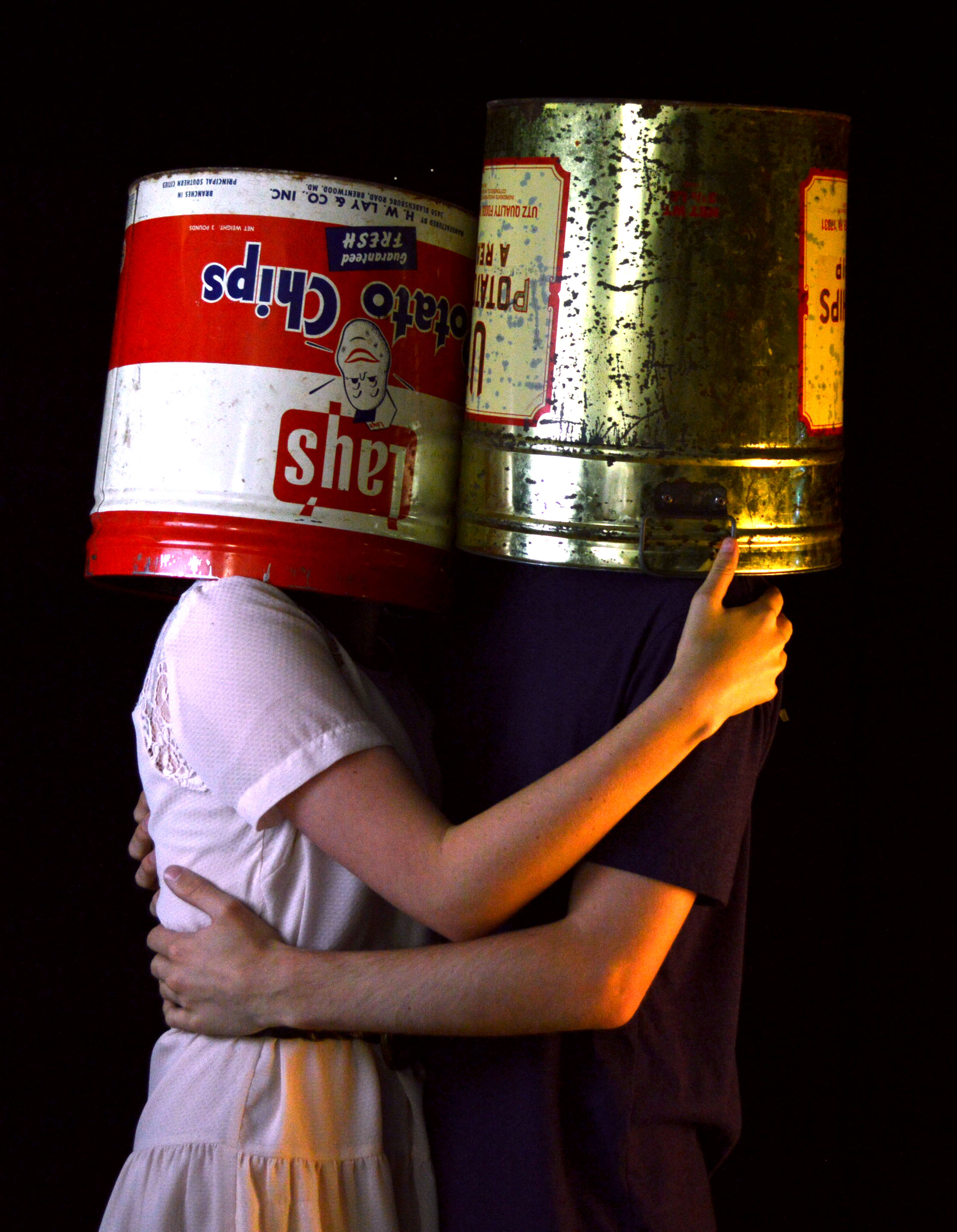 Congratulations to Umesh Padia, Poolesville High School Senior for being selected as an Intel Semifinalist.

The Intel Science Talent Search is administered by the Society for Science & the Public, a nonprofit organization that is dedicated to public engagement in scientific research and education. There were 300 semifinalists nationwide, who were chosen from a pool of nearly 1,800 entries. MCPS has been a national leader in this competition for many years and routinely is one of the school districts with the most semifinalists.

“I am extremely proud of our students who continue to display high levels of creativity, innovation, and passion in this rigorous competition,” said Superintendent of Schools Joshua P. Starr. “Congratulations to our semifinalists, their families, and the educators that are supporting them.”

Senior Andrew Wang was selected to present his research, “Development of HTLV-1 vector as a gene expression delivery vehicle for expression of Hemoglobin in hematopoietic stem cells from Sickle Cell Disease”, at the 2015 Junior Science and Humanities Symposium at Georgetown University in January. As a regional finalist, Andrew has won a trip to the National Junior Science and Humanities Symposium and will compete for scholarships and the opportunity to present at the national level.

Three-hundred semifinalists were announced in the Siemens Competition from a field of 1780 entries nationally. Four PHS students have been chosen as semifinalists:

The finalists were chosen from a record number of competitors in the preliminaries and won prizes for their school science programs, along with scholarships for each student to the NYU School of Engineering. Twelve teams of finalists, including two from Dubai, United Arab Emirates, competed as part of an international pilot. 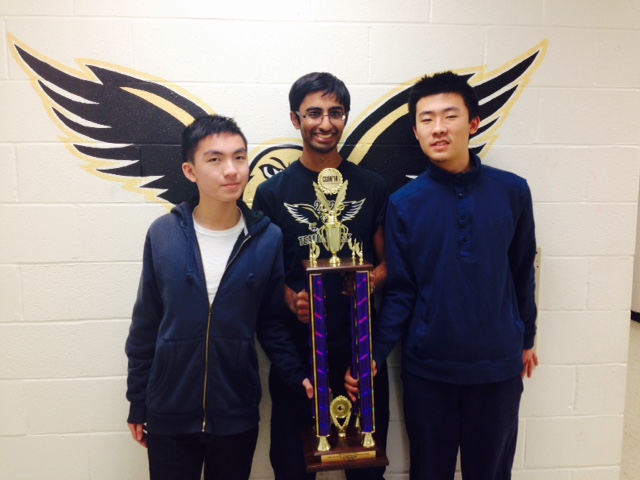 Classical Guitarist Katie Cho (Sophomore) began her guitar studies at the age of eight under the tutelage of Jorge Amaral. Her full solo recital debut, at twelve, was performed at the Conservatory of the Baldwin Wallace University in Ohio. By age fourteen she had won first prize in eight competitions. She has performed at the Kennedy Center in Washington DC, and had the honor of opening a recital for world-renowned guitarist David Russell. Click HERE to see a video of Katie performing Sonata, Op. 61: I. Allegro (Turina)

Semifinalists from MCPS were selected from among high school juniors who were top scorers on the 2013 PSAT/National Merit Scholarship Qualifying Test. Approximately 16,000 semifinalists across the nation will be considered for advancement to the finalist stage of the competition.

Finalists will be considered for $2,500 National Merit scholarships, plus additional corporate-sponsored and college/university-sponsored scholarships. That will be announced later in the school year.

Congratulations are extended to junior Ankit Sheth.  Ankit’s essay took 5th place in the World Genesis Essay Contest this summer.  He was the youngest winner so this is quite an accomplishment!  Ankit is  a member of Model UN and submitted his essay as a club activity. Click HERE for more information.