About the Scholarship | About "K2" | Past Winners | Donate

A three-year journalism student at Blake, Logan Dreher served as co-editor-in-chief for the 2014-15 school year. Logan distinguished herself early as a sophomore in Journalism I and began writing for the main paper in November. A versatile writer, her many pieces graced all sections of the paper. In addition to her journalistic writing, she won the Write On contest and published a nonfiction essay in Bethesda Magazine. She won two Silver Key Awards for Fiction in the National Scholastic Art in Fiction Contest and won first place in the countywide Fran Abrams Short Fiction competition. She will attend Brown University in the fall. Although she has not decided on a major, she plans to write for the Brown Daily Herald. 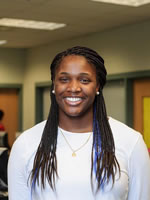 Courtney Hutchinson capped her three years in the journalism program at Blake as co-editor-in-chief. She began covering JV sports as a Journalism I student, and she emerged as a leader and problem-solver as a junior. Commitment has characterized Courtney’s tenure with the Beat. In addition to her fine writing, she is a whiz at design, and she always hammered out every detail prior to submitting the final proofs. She will be attending Hood College in September, where she will be majoring in early childhood education. She will also be playing volleyball.

The Kevin Keegan journalism scholarship is an annual prize awarded the student most dedicated to the success of the Blake high school newspaper over the course of a single school year. Previous winners were awarded based on their contributions to the newspaper's sports coverage. The criteria will be expanded to all Journalism contributions for 2016.

The Beat, guided by Keegan since 2001 upon his arrival at James Hubert Blake High School, has been an inspiration and source of pride for Blake students through his retirement in 2012 and beyond, under the current stewardship of Joseph Caulfield.

The prize, enacted in 2014, is dependent entirely upon alumni donations. Click here if you would like to donate to this scholarship.

Of all the kind words showered upon Kevin Keegan by his loquacious alumni and dedicated friends in the years leading up to his retirement in 2012, former Blake High School Principal Carole Goodman probably said it best (and most concisely): “Mr. Keegan is one of those teachers that students remember forever.”

Effectiveness in brevity was a hallmark of Mr. Keegan’s journalism course. So was success. In 34 years of teaching newspaper journalism to Montgomery County high school students, their publications won Maryland’s top award for high school newspapers 18 times. A former student at Rockville High School won a Pulitzer Prize for feature writing in 2009. Another is a columnist for the Washington Post. I’m humbled to join the list of successful “Keegan University” graduates, as a writer for Sports Illustrated.

I think I speak for the majority of his former students when I say, at some point in our lives, Mr. Keegan scared the heck out of us. Wrote Lane DeGregory, the Pulitzer winner, in 2003: “Mr. Keegan is tall and lanky… his short brown hair is starting to slide into a widow's peak, accentuating the wrinkles that hundreds of students have etched on his forehead. He has lived in suburban Maryland for a quarter-century, but when he quotes Shakespeare and Billy Joel, he still sounds like someone from The Sopranos.”

With a baritone voice and a perfectionist’s grading scale, Keegan made it his policy in three decades of teaching to pluck the best students from around the school and persuade them into joining his notoriously challenging newspaper course. We learned about picas and inch counts and proper semicolon use, and slowly, methodically, (painfully), it became our newspaper.

John Kelly, the Post columnist, remembers,“We joke and laugh and carry on as this wonderful thing — equal parts information, entertainment, outrage: a newspaper — comes to life beneath our hands.”

It was his gift to Rockville High School students, and later, to a new high school on Norwood Road. The 1992 Montgomery County Teacher of the Year left Rockville High School in 2001 to join Blake High School under principal Carole Goodman and brought with him a recipe for unparalleled teaching success. In 2005-2006 and 2008-2009, the Weekly Reader and the Association of Educational Publishers judged the Blake Beat as the best high school newspaper in the country based on evaluation of its December issue.

Kevin began coaching a previously-undistinguished Rockville It’s Academic team in 1983. Within a year the team won the first of three Washington Area Championship he would capture over ten years there en route to a 27-7 record. His last four years at Blake, he joined forces with sponsor Joe Caulfield in leading the Bengals to a 13-3 record, capped off with a Washington-area title and a Washington-Baltimore-Virginia Super Bowl championship in his final year of teaching. In the 54-year history of the classic television game show, he is the only coach to have won the Washington title at two different schools.

A longtime SAT tutor himself, Keegan decided to do something to improve the PSAT and SAT scores at Rockville. He ran an after-school program, and he donated all of the tuition money to charity. The number of Merit Scholars skyrocketed. He established a similar program when he arrived at Blake in 2001 and reaped similar results.

It is with his profound impact and legacy in mind that we award the Kevin Keegan Journalism Scholarship, a monetary prize awarded yearly to the student most dedicated to the success of the Blake Beat, as decided by current sponsor Joseph Caulfield and a panel of alumni.

Thank you for reading, and thank you for your contribution to the vast and ever-expanding teaching legacy of Kevin Keegan. 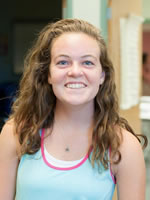 Jordan McLean distinguished herself as the newspaper’s Director of Sports as a junior and as Associate Editor for Sports as a senior. An athlete herself—serving as captain of the field hockey, swimming and lacrosse teams—Jordan covered football, basketball, baseball, softball, volleyball, track, and boys lacrosse. She is a fine writer, a keen copy editor and a key troubleshooter. She will be attending the College of the Holy Cross, where she will major in biology and perhaps write for the Crusader.