MCPS Schools will be open 5 Days a Week for In-person learning for the 2021-2022 School Year: Learn more 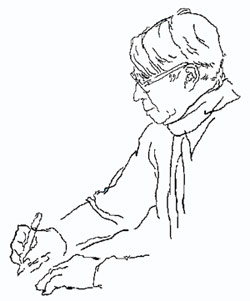 Our school is named for the American poet, Carl Sandburg. Sandburg was born on January 6, 1878 in Galesburg, Illinois. His parents were poor working Swedish immigrants. A person of many interests and talents, Sandburg especially loved to read and to write. His 6th grade teacher told him, "You don't know what good friends books can be till you try them, till you try many of them." *

Sandburg never completed high school because his family could not afford it. However, he studied on his own and was admitted to college but never graduated because he only took courses in which he was interested . He was a life-long learner. Never content with routine, Sandburg once traveled across the United States as a hobo and later used the experience as background for his poems. His poems were often about everyday people, sights, and sounds and have had wide appeal to ordinary people.

Sandburg married Paula Steichen, who was also of Swedish origin. They had four children, one of whom had epilepsy, another which died at birth, and a third who had learning difficulties. Sandburg worked as a newspaper journalist. At night, he continued to write stories and poems all his life. He died at age 89 on July 22, 1967.

Carl Sandburg was a person who succeeded despite his many hardships. He was the parent of special needs children, wrote stories and poems for children as well as for adults, understood the immigrant experience, and had an intense interest in "simple things that happened in ordinary places to ordinary people." ** It is fitting that our school is named for Carl Sandburg.