The Olney School opened in 1875 and operated until 1929.  Olney began as a small, one room schoolhouse that stood on Route 108 just west of St. John's Episcopal Church.  How would you like to ride a horse to school?

In 1929, classes shifted from the original location to the Sherwood Consolidated School, which was near the present Sherwood High School on Route 108.  Olney Elementary School was built on its present site in 1954 to relieve overcrowding at Sherwood Elementary.  The school building was rectangular, contained ten classrooms, an office and a health room.  The cupola and weather vane stood above the front door!  At the time of the original dedication, May 17, 1954, Theodore McKeldin, Governor of Maryland, rode in a horse-drawn coach from the Olney Inn to the existing site to dedicate the new building.

As the first elementary school in this area, Olney Elementary serviced the children living in the communities between Laytonsville and Sandy Spring, north to Howard County and South to Manor Club.  In 1956, part of the lower wing of classrooms was added, plus the all-purpose room and kitchen.  In 1959, more additions included a library, two kindergarten rooms and five classrooms.  A new media center and enlarged administrative area were included in a 1974 renovation.  In 1981, Olney Elementary was recommended to be closed due to declining enrollment.  A community effort was launched to save the school and prepare for projected growth in Olney.

In 1989-90, Olney Elementary students were temporarily housed in Brooke Grove Elementary while their school was enlarged and modernized.  Students and staff returned to Olney in September, 1990.  The building retains the Williamsburg essence of its immediate surroundings.  It has 30 classrooms, computer lab, fully automated media center and communications studio, all-purpose and dual purpose rooms.  There are many special purpose rooms, including reading, speech, resource, counselor, parent volunteer and team rooms, and an administrative office suite with conference room.

The "Town Meeting", a relief mural, welcomes visitors to the school.  The mural depicts animals native to the Olney area when Olney was first settled.  The closed courtyard of the school features a life sized dragon sculptured by Lorraine Vail which joins the old and new parts of the school.  A brass weather vane still guards the building. 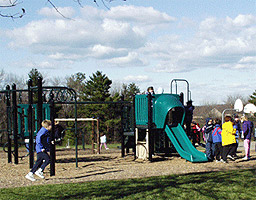 The building and grounds provide an attractive, inviting environment that enhances the teaching and learning process, where students, staff, and parents work together as a community of learners.