Who was Colonel Zadok Magruder?

Colonel Zadok Magruder was a Revolutionary War patriot and farmer. He was born in Prince Georges County in 1729, the third generation of Magruders from Scotland, the son of John and Susanna (Smith) Magruder. As a young man, he moved to Montgomery County, at that time the southern region of Frederick County. He inherited 600 acres of land near Norbeck in 1745 and eventually built a house, "The Ridge", in 1750 near Redland, a community with a population of about 50. Rockville at that time had a population of almost 1,000. In 1754 he married Rachel Pottinger Bowie and they had eleven children, 8 girls and three boys, one of whom, Zadok, later became a doctor. ("Zadok" had a variety of spellings, including Zadoc, Zadock, and Zaddock) 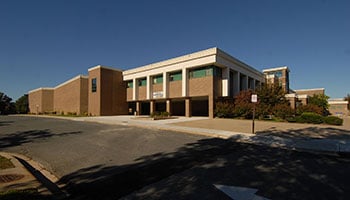 Zadok and his brother, Nathan, in 1774 were members of the General Committee to Annapolis (as local representatives) and they became members of a committee charged with executing the resolves of the American Continental Congress regarding the British Tea Act. He was also a member of the Maryland Committee of Correspondence. Zadok Magruder attained the rank of colonel in command of the "Home Defense Battalion of Lower Frederick County", part of the Maryland militia. He was appointed, along with his brother, as a commissioner to establish the government of Montgomery County when it became a separate county in 1776.

Colonel Zadok Magruder was an ardent worker in the resistance to England, as were many in the Magruder clan. They were farmers, merchants and mechanics who pledged their fortunes in the pursuit of independence and the cause of liberty. Magruder High School's location is near the site of "The Ridge", the Zadok Magruder family home.

The staff of Col. Zadok Magruder High School, a large public high school with deeply embedded traditions as well as a focus on the future, works together with our diverse students and their families to create a positive learning environment accessible to all students, where integrity and a sense of community are paramount. Through meaningful co-curricular activities, equitable support systems, and rigorous instruction, we promote the development of literate, responsible, well-rounded members of society.

As part of Montgomery County Public Schools, we are guided by the following core values:

In addition, the staff of Magruder High School operates on the following beliefs: