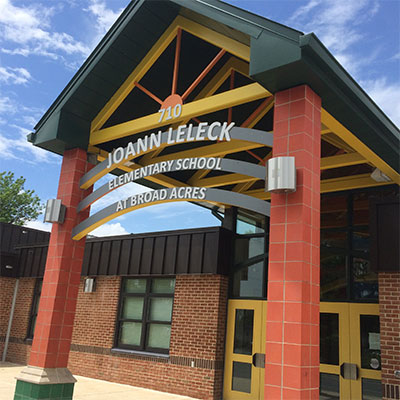 was formerly known as Broad Acres Elementary School. On October 1, 2014, the name was changed to honor JoAnn "Jody" Leleck, who was principal here from 1999 to 2004.

Broad Acres, however, was not the school's first name. When it opened in 1952, the school was called Avenel Gardens ES. Avenel Gardens was the name of the farm that existed on the site before the land was sold to the school system. Shortly after the school opened, however, the owner of the farm asked to have the name back. To choose a new name, the community ran a contest. Broad Acres was chosen because it described the wide open fields and woods which, at the time, surrounded the school. The name was suggested by a student.

Over the years, the facility has been expanded and rebuilt to meet the changing needs of the community. The first additions, made in 1968, included a gymnasium. In 1974 and again in 1990, the building was both enlarged and modernized. In 1997, a school-based health center, Linkages to Learning, was added. Finally, during the 2005-06 school year, our administrative offices, kitchen, and all-purpose room were modernized and eleven classrooms were added, replacing the small village of portable classrooms previously supplied by the state.

Broad Acres currently serves about 850 students enrolled from Head-start through fifth grade. These students come to Broad Acres from all over the world – over 30 countries – and speak nearly as many languages. Student services include special education inclusion classes, a METS class (serving students with interrupted or no prior school experience), various academic supports (reading, ESOL, mathematics, and science), and Linkages to Learning.

Beginning in the fall of 2001, Broad Acres underwent an internal restructuring program. You can read more about this program in the section below.

Beginning in 2001, there was a unique collaboration between the superintendent, the community superintendent, and the unions representing teachers, supporting services, and administrators, which jointly made a commitment to increase student achievement at Broad Acres Elementary School. The outcome of this collaboration was Montgomery County’s formulation of a plan to restructure Broad Acres Elementary School by focusing on instruction, teacher recruitment, teacher training and community outreach. 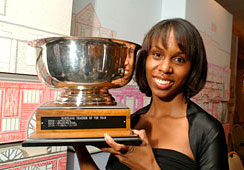 Kimberly Oliver Burnim, a Broad Acres Elementary School kindergarten teacher credited with helping turn around declining test scores at the school, was named National Teacher of the Year for 2006. This is the first time a Montgomery County Public Schools or a Maryland teacher has won the award. 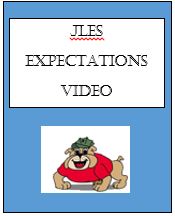 This video was created in order to show our students the expectations of routines at JoAnn Leleck Elementary School at Broad Acres.