Blake in the News

We're glad to announce that three students from our very own James Hubert Blake High School will be participating in the CIEE Study abroad program and traveling to new exciting locations all over the world. Global Navigator summer abroad programs take you way outside your comfort zone, far away from home. Explore a different culture in more than 25 amazing destinations across the world. Come home with new skills, newfound passion, a broader perspective – and maybe even college credits!
Congratulations to the winners:

Blake students began competing at 5pm on Friday and finished publishing their game on Sunday at 5pm. They programmed code, wrote dialogue, designed levels, animated, and illustrated through the nights in a game development lab all weekend with little-no sleep. The judges were made up of industry professionals from Bethesda Game Studios, Zenimax Online Studios, The University of Baltimore, and Montgomery College.

The event kicked off with a keynote speech from Bruce Nesmith, game designer at Bethesda Softworks and lead designer on the top-selling release, The Elder Scrolls V: Skyrim. This prestigious honor marks the first time that a team won both the 1st Place Judges Award and 1st Place Audience Award! James H Blake High School is the only team made-up entirely of Montgomery County High School Students. Other development teams consisted of university students and industry professionals.

Their teamwork, dedication, and perseverance was truly amazing to witness from beginning to end.

The winning team was selected on Sunday, January 25th. The winner of the Judge's Award and the Audience Award went to "Second Chance." A strategy/puzzle simulation that offers a second chance at life by unlocking clues and unraveling a mysterious medical trauma. 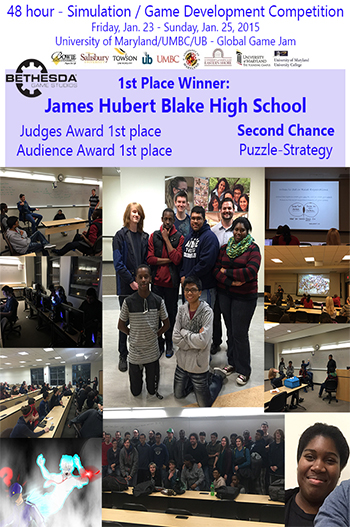 Congratulations to Our Blake Students

Keenan Lo (Class of 2015)
Keenan won the Posse Scholarship and will be attending Sewanee University of the South in Tennessee. The Posse Scholarship is a very competitive scholarship that identifies young leaders in the United States. In the DC area where Keenan applied, about 1600 people were nominated with only 60 people winning scholarships to 6 different schools. Please congratulate Keenan when you see him in class or in the hallway!

Jeffrey Powell-Young (Class of 2016)
Jeff was selected to participate in the YLGW program. It was a long shot because the program is fairly competitive and there was a very short time frame for submission of materials. YLGW is a six month program with monthly sessions scheduled on Fridays from January-June. Jeffrey’s parents have reiterated to him the value of this opportunity for him and for other Blake students in the future. Please congratulate Jeff when you see him in class, in the band, or on the basketball court!

Whenever the players on the James H. Blake High School football team get down on themselves, many student-athletes said, they don't need to look further than their own sideline for a source of inspiration. That's where they see senior Paul Farrell, who, following a spinal cord injury, is an assistant to Blake coach Tony Nazzaro. Farrell was an offensive lineman for the Bengals last year until the injury ended his season. His duties include coordinating special teams, analyzing film, and supervising practice drills, but perhaps his most important role is to serve as a reminder of why the players should give it their all every single play. Farrell's classmate and close friend Wyatt McInturff said it's weird for the players listening to someone their age, but that it's great having Farrell around. “He encourages us and he lets us know, 'Don't forget what happened. Let that be a drive for you.'” Farrell's playing career ended on a freak injury he suffered against Sherwood in the eighth game of the 2013...

This year 4 of Blake's very own our Fashion students were selected and asked to participate the year’s Baltimore Fashion week on August 14th. It is every designers dream to show their collection in Fashion Week. Over the summer the contracts were signed making it official! Those four hard working students got to get their "feet wet" for the first time in the real world, and have happily started to “feel the pressure!" The four are made up of three graduating seniors Emma Bahi, Linnea Galletta and Capria Williams, as well as Sophtmore Christine Evans.

Of The People: Constitution Day 2014

Constitution Day provides a great opportunity across the country to learn about the document, as well as the National Archives. Students took a short tour of the National Archives, learned about their document collection, and how historians actively use primary source documents in their research. Students also learned about the Constitution through a document analysis strategy that reinforces the skills needed to read, write, and think like a scholar. In addition, for Junior Adalia Jimenez it provided the opportunity for a one on one interview with David S. Ferriero United States Archivist....