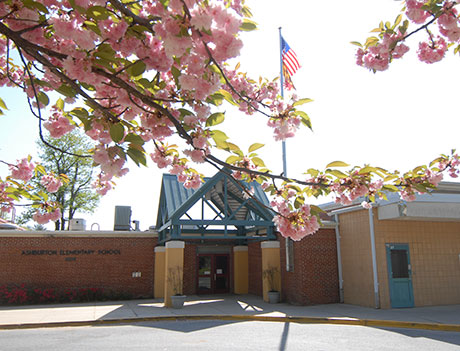 Ashburton Elementary School was originally built in the fairly rural Bethesda, Maryland community in 1957. Mr. Roy Collins was the principal and there were about 250 students. The rapid growth of school-age children in the late 50's and early 60's throughout America was replicated in Ashburton, which needed additions in 1958 and 1961. There were even enough students throughout the 60's and 70's to warrant an assistant principal. Mr. Collins' worked with two assistant principals, Mrs. Lacey and Miss Ann Bruce. As the baby boom ended, however, the school population decreased. Mr. Collins retired in 1975 as the population was diminishing quickly.

Mrs. Julia Penn became principal at a time when Ashburton, like many other schools, was in danger of closing. But due to the hard work of the community, Ashburton remained open and merged with two schools that were closed, Fernwood and Grosvenor. In 1985, Ashburton's main office was renovated and an elevator was added. In 1988, Ashburton was added to the modernization list. Mrs. Penn retired after the 1990-1991 school year.

Mrs. Joan Carroll became principal just as plans for a school modernization were about to be completed. Mrs. Carroll worked with school based and school system based committees to finalize the plans for the NEW Ashburton. Ashburton's physical plant was in great need of replacement and it was rapidly becoming too small for the neighborhood. During the summer of 1992, Ashburton was moved to Grosvenor Elementary School for the 1992-1993 school year while the modernization took place.

Ashburton Elementary School was rededicated on June 7, 1994. Mr. Collins, now living in Venice, Florida was unable to participate but Mrs. Penn and former Ashburton parents and staff were able to join in the celebration along with government officials from the school board, the county council and the state government.

In 1996, Mrs. Carroll was awarded the Washington Post Principal of the Year, after the staff and PTA nominated her.

In the fall of 1998, Joan Carroll, Media Specialist Brenda Anderson, and Media Assistant, Wendy Cimmet, labored over an application for the National Blue Ribbon Award. A US Education Department committee member visited Asburton and met with staff and community to verify the documentation. We were awarded this prestigious National Award in 1999. Many tangible benefits came in addition to the award itself, including gifts such as the Weather Station, several laptop computers and software.

In 1999, Joan Carroll was appointed principal of North Bethesda Middle School, which reopened after Tilden Middle School grew over 1250 students. Mrs. Carroll worked with the community to renovate the school and to create a strong middle school. Ashburton students matriculate to North Bethesda along with Wyngate and Kensington Parkwood elementaries.

Dr. Barbara Haughey came to Ashburton with years of experience in elementary education, middle school special education, and high school administration. Dr. Haughey maintained the high expectations of the school for both students and staff and strengthened the community ties with our many partnerships (OASIS, Suburban Hospital, the Naval Dental School). She has worked with MCPS on a variety of committees. Recently she co-chaired the Grading and Reporting Committee as MCPS evaluated the current policies on grades and report cards.

The school was a part of a technology modernization plan that was implemented in the 2002 - 2003 school year and will be updated again in the 2006 - 2007 school year.  This plan provides for over 100 Dell computers for the school.

In 2007, we nominated Suburban Hospital for the Montgomery County Chamber of Congress Business Partnership Award and they were presented a nice award at the Champions for Children Dinner. We are very proud of our partnership with Suburban and feel fortunate to have a continuing relationship.

The ten-room addition was started in the summer of 2007 and completed in the summer of 2008. The art room was relocated and the new room overlooks the playground with its own patio. Eight classrooms for fourth and fifth grade are in the new wing which resembles the older building with matching colored wall stripes and floor tile. The exterior brick also matches the existing building. The interior courtyard has tables and benches and a bricked area with engraved bricks sponsored by the PTA.

Included with the project are four new playgrounds, two in the main play area and an additional more advanced to the east of the building. Students participated in a consensogram voting for their favorite pieces of play equipment.

Currently, Ashburton has students from about 40 countries, speaking almost as many languages. We see much mobility of our students throughout the year; our mobility rate is listed at 18% but some years it seems like much more. Class size varies from a low of 23 to 30 students per class. We are projected to have seven kindergarten classes, six first and second grades, seven third grades, five fourth grades and six fifth grades.

Walter Johnson Cluster (of which Ashburton is part) principals and staff development teachers have worked closely for the past few years; meeting frequently and working collaboratively on Baldrige. Vertical articulation has been a priority for the cluster both within schools and as students transition from one level to another.

Some of the information from this history was excerpted from a School History by two former PTA presidents, Dr. Sue Olson and Mrs. Kristina Marshall.